MILK AGAR BREAST PLATES:
-A group of small bacterial sculptures plated onto milk-based agar inside of petri-dishes.
These plates have been inoculated with the image of a maternal breast, using the bacteria Serratia marcescens, which was heated to different  ​temperatures in order to achieve a pallette of red/orange/pink shades containing the tripyrrole pigment called podigiosin. These were then combined with locally gathered bacteria and fungi found within the 400 year old farmhouse of Cultivamos Cultura, the bioarts studio of Marta deMenezes in Sao Luis, Portugal. Serratia Marcescens is a bacteria capable of casein hydrolysis, or digestion of the milk proteins that make up 80% of  cow's milk and 20-45% of the proteins in human milk. Serratia marcescens is also an opportunistic pathogen found in both soil and sterile environments, as well as the gastrointestinal systems of children. ​This work addresses issues of protection, breastfeeding, infection and inoculation.
(Press play for slideshow, then scroll down to next set)

Variegation Plates:
Using the motif of a dissected variegated camellia flower, I attempted a "cross-species" transfer of the growth pattern of each sequential petal, using bacteria on black agar inside petri dishes. 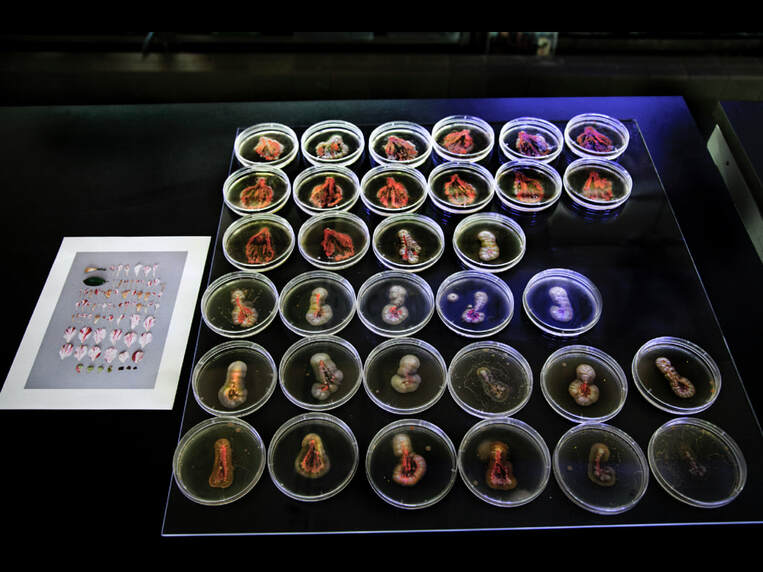 Culture/Reculture:
This piece was created in Portugal during a residency at Cultivamos Cultura. Bacteria gathered under controlled conditions were used to inoculate a historic window frame in the pattern of traditional Portuguese tile motifs. I designed the framework to reflect metalwork found in the region, and it was constructed to specifications by a local blacksmith. The idea of gathering "cultures,"  then plating the bacteria to grow in the format of the regional tilework  was a way to connect biological growth to cultural traditions.
(scroll down)​
​
HYDROPONIC UNITS:
Collaboration: Group Zen Migration, Gardens as Biotechnik-Tokyo, Japan 2018
This was a collaborative piece constructed at the biocamp gathering "Gardens as Biotechnik" in Tokyo, Japan by group "Zen Migration."  Our group used the talents of various team members to: draw the design of a cherry tree, 3-D print a mold to be used to construct differentially-colored agar, and tint "flower-like" oat flakes to serve as a food source for slime mold. Slime mold was then inoculated onto the plates, and we attempted to use blue light sources (which inhibits growth of slime mold) as a "negative" design factor. This combination of design by the artists' hand, the biological growth tendencies of slime mold towards a food source, and the adverse effects of blue wavelength light were intended to create a poetic, multi-level collaboration of living and non-living systems.
Proudly powered by Weebly